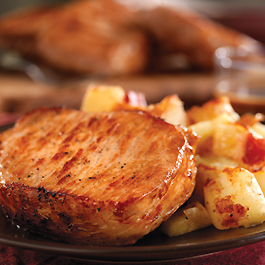 1. Cook bacon in large skillet over medium heat until crisp and browned, about 10 min. Drain on paper towels. Reserve about 4 Tbsp. bacon fat.

2. Heat butter and 2 Tbsp. of bacon fat in a medium nonstick skillet over medium heat. Add potato, onion, garlic and apple and cook until lightly browned, about 10 min. Remove

from heat and stir in the maple seasoning and cinnamon, if using. Season with salt and pepper. Keep warm.

1. Pour off all but 1 Tbsp. of the pan drippings from the skillet. Whisk flour into pan drippings and let bubble over medium heat for 1 min. 2. Whisk in broth, maple syrup

and cream and bring to a boil. Cook, whisking often, until mixture reduces and thickens, about 2 min. Season with salt and pepper.

3. Crumble the bacon into the hash. Serve chops hot with the hash and sauce.

* Recipe and photo courtesy of National Pork Board. For more recipes visit: